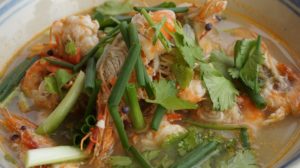 As we continue our culinary tour of Asian soups, our next stop is in Thailand.

Now that we’ve had an in-depth look at Chinese hot pot and have explored the origins of Korean Army Base Stew, it’s time to move along. As we continue our culinary tour of Asian soups, our next stop is in Thailand. Here, we will sample two kinds of soup: tom yum and tom kha. It’s time to find out what the difference between them is.

Tom yum soup is also called tom yam. If you are a fan of hot and sour soup from your favorite Chinese spot, then you have an idea of what this soup is like: sour and fragrant. It is typically packed with shrimp. However, you can find variant recipes that are filled with pork instead. Now, you might be wondering how the soup got its name. The name refers to a boiled broth that contains three distinct flavors: sweet, spicy, and sour. You’ll often find this type of Asian soup loaded with galangal, lemongrass, lime juice, lime leaves, fish sauce, and yes, chili pepper.

Tom kha is so similar to tom yum that you might not be able to tell the difference. But here is one critical ingredient: coconut milk. Unlike many other Asian soups, the broth depends on coconut milk. For the full effect, you’ll need this element. It’s still hot, spicy, but it’s also creamier. The broth also highlights the taste of galangal, and without it, you won’t have a true tom kha soup.

What Else to Know

Picking a favorite can be tricky. Ultimately, it comes down to which flavor profile appeals to your taste buds more. The calorie count also depends on the ways you followed individual recipes. Tom yum typically has about 90 calories; tom kha has 350 due to the inclusion of coconut milk. Something to note is that both soups are flavorful and delicious. Compared to other favorites like French onion soup, they both have fewer calories. It’s also a great meal idea for the winter when you need to clear out your sinuses. Finally, you can modify the spice level depending on your tastes. For instance, just leave the chili peppers out of the mix or ask for it to be left out if you want to try this as part of your meal at a Thai restaurant!