What Is the Korean Fire Noodle Challenge? 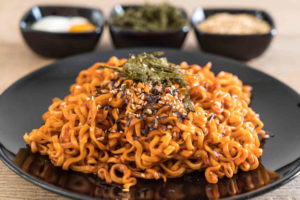 Korean fire noodles are supposed to be some of the hottest and spiciest noodles you can find anywhere in the world.

Social media is no stranger to a wide variety of unique challenges. Most of them seem like outlandish dares or pointless pranks. Korean fire noodles are supposed to be some of the hottest and spiciest noodles you can find anywhere in the world. But for many consumers, they might not know what these noodles are, or what the hype behind the so-called challenge is.

The hot stir-fry chicken noodles are the star of this show. A specific famous Korean manufacturer makes it of ramen noodles. Even though it is instant ramen instead of the homemade, freshly-prepared variety, that doesn’t tone down any of its power. The noodles rank in at 4,004 Scoville, which indicates how hot and spicy a particular food is. The Korean fire noodle challenge first came about despite its punishing reputation: people can’t get enough of it.

From there, the Internet had a field day. Finishing the noodles was the basis of the challenge, and it became a viral sensation. More rules came around as time went by, allowing the trial to mutate and evolve into something much more daunting. For instance, time limits were added. Eating multiple packages’ worth of noodles and even finding and consuming a variant that was even spicier all become twists that were as popular and notorious as the original dare. Many different Asian supermarkets carry them, and in Korea, they are so plentiful that they can be found in convenience for less than an American dollar. Believe it or not, there is even a makeup brand dedicated to celebrating these incredibly spicy noodles.

Even if you have never heard of the challenge, hopefully by now, you have enough knowledge to decide for yourself if you would like to try it too. The fad is still going strong, and many people with brave palates and stronger stomachs will always actively seek out these Korean noodles and do their best to finish a bowl or two. The ramen noodles were already widely-known as being a cheap foodstuff, even if they aren’t nutritious ones. On the flip side, college students everywhere can rejoice though, as they now have a new option to whet their appetites and match against their metabolisms!

Categories: Korean Food | Tags: Korean food, spicy noodles, and fire noodle challenge | Translation Priorities: Optional
This entry was posted on Friday, September 20th, 2019 at . You can follow any responses to this entry through the RSS 2.0 feed. Both comments and pings are currently closed.
Lotte Plaza
5821 Riverdale Rd. Riverdale, MD 20737
Phone: 301-699-7508